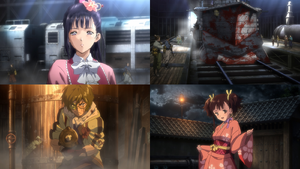 The immortal monsters known as Kabane have attacked Aragane Station. Ikoma, a boy who lives in Aragane Station, ran against the waves of terrified civilians to fight against Kabane using a weapon he has been secretly developing - the Piercing gun.

In Hinomoto, the hayajiro Koutetsujou, an armored train, passes an abandoned station and gets attacked by several Kabane, humans turned monsters by a viral infection. The bushi on the train fight and defeat them, but one is bitten and the rest force him to commit suicide to prevent him from turning and endanger the rest. In the mean time, at Aragane Station, Ikoma, a young steamsmith works on a powerful piercing gun capable of killing the Kabane.

On the next day, Ikoma while doing his regular job, Ikoma explains his progress with Takumi and realizes his mistake for the gun and wants to go home and work on it, but they receive news that Koutetsujou arrives. While they perform cleaning on the train, Ikoma steals some Kabane body parts. Kenshou Yomogawa, the leader of the Yomogawa family, welcomes and excuses Mumei and Shimon, two passengers on the train from the mandatory Kabane inspection. The inspection finds an infected, who tries to run while stating he isn't a Kabane. Ikoma interfere protecting the man, stating they need to lock him and not kill him as that's the rules the bushi made themselves. That only annoys the bushi who then attack Ikoma and the Kabane hearts he collected get seen. The man is then shot and as he dies everyone realizes he wasn't infected, while Ikoma gets thrown in jail in suspicion of being Kabane. During the night, Mumei sneaks out and visits Ikoma as she is intrigued by his personality and beliefs.

Another hayajiro Fusoujou arrives at the station. The defensive bridge gets lowered, but as the train is taken over by the Kabane, it crashes at the defensive wall, allowing the Kabane to attack the station. Emergency is annonuced and Ikoma manages to escape jail and heads home. He manages to lure a Kabane into his house to test his gun. As he kills the Kabane, he starts celebration only to find out he got bitten. Shimon gets bitten too and instructs Mumei to continue to Kongokaku and await their master orders. He then proceeds and takes his life. Ikoma starts transforming into Kabane, to prevent it, he uses several painful and dangerous methods to prevent his blood to flow and carry the virus to his brain. As he successfully does, he reverts the transformation to his human form. Meanwhile, Mumei faces and kills a Kabane using a blade in her shoe.

Characters in Order by Appearance[]