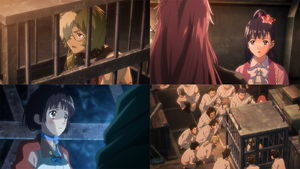 The Koutetsujou had been linked to the Kokujou, and Takumi and the others were under the rule of the Hunters who demanded their blood be collected. While others fall into despair, Ikoma refuses to give up hope as he devises a counteroffensive.

Biba had taken Koutetsujou and his passengers, using their blood to feed his Kabane. While Takumi was giving blood, he sees a Hunters member Warabi, who cuts of arm of another man just for fun and gets angry. He goes to Ikoma, who tells him they will make their move tomorrow night, when they come for blood again.

Biba offers a deal to Ayame, that if she can open the gates to Kongoukaku using her uncle, and arrange a meeting with his father, he will guarantee the safety of her people. Wondering what his plan is, Biba tells her his past of the time his father sent him with 400 000 troops to Kyushu to exterminate the Kabane, they were winning, but then replacement supplies stopped arriving, they were overrun and wiped out. His father was behind all of this and he wants to punish his father with his own hands. Meanwhile, Ikoma reveals his plan on taking control of the front car of Kokujou.

Mumei goes to Biba asking why he is taking Koutetsujou's passengers blood. He realized she fears him and tells her that he will give a message so that the passengers won't be hurt if they remain peaceful. As she leaves, Biba comments she needs serious repairs. Next night, Ikoma starts his rebellion and revealing that Sukari had been feeding information while pretending to be part of the Hunters. Ikoma fights Warabi, but Takumi intervenes and knocks him out and they continue making their way towards the front cars.

Learning about the rebellion, Biba tells Mumei to handle it, threatening her that if she doesn't, he will stop giving her medicine and she will turn into Kabane, but Mumei refuses wanting to be together with the passengers and eat rice. As Biba's men try to hold her down, she attempts to run, but Biba had been giving her smaller doses of blood, resulting in faster exhaustion and she got captured and sedated.

Ikoma and Takumi continue ahead, but one of the keys doesn't work and they get ambushed by Biba and his men, as he had anticipated that if he starts a revolt it will be today and had swapped the keys. He then shoots at Ikoma, but Takumi protects Ikoma with his body and gets killed by Biba. Sahari then starts beating Ikoma and then blew up his hand. Biba calls for Mumei and orders her to kill Ikoma, being under his drug, she obeys his order and stabs Ikoma, who then falls off the train into a coast far below.