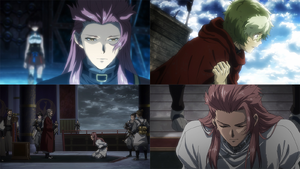 Burning Life ( 燃える命, Moeru Inochi) is the eleventh episode of Koutetsujou no Kabaneri.

Biba reunites with his father Shogun Koukyo after 10 years, as Mumei's Nue stands ready. Meanwhile, Ikoma has lost his confidence and willpower. He is now a mere shell of his former self and can only cower at the sight of the Kabane.

Kajika and the rest find Takumi dead and mourn him. Meanwhile, Ikoma is still alive and washed up on a shore. Biba tells Mumei about how his father had attacked him out of fear when he was young and injects Mumei with black blood so she can turn into a Nue. The Shogun Okimasa Amatori announces that Biba had destroyed Iwato Station, but assures his people that Kongoukaku is impenetrable and then kills the only communication operator who knew about the Black Fog monster, to not spread fear among the people.

Koutetsujou arrives at Kongoukaku and Ayame pretends to have captured Biba prisoner, because he had Koutetsujou's passengers hostage. She is allowed entry of Kongoukaku and meets his uncle, and then she and Biba are taken to see the Shogun. Meanwhile, Ikoma had lost his will to live and fight and hides from a Kabane, but then meets Kurusu, who had Soue Arata hostage and Ikoma tells him what happened.

Meeting with the Shogun, he finds a blade he had given Biba long ago and Biba asks the Shogun to kill him himself. The Shogun then prepares to draw the blade, but notices his hands gets pierced by something while grabbing the blade handle. Biba then tells a story of how he survived and that there are Kabane among people and he can identify them, saying that people should kill those that shows sign of Kabane. The Shogun then starts turning into Kabane, as the blade had injected him with the virus and some of his men starts shooting at him. Biba then frees himself and kills the Shogun, telling him that fear killed him. Biba announces that there are more Kabane hiding among them and his men infect some people, causing panic among the people and they start killing each other out of fear. His men open the gates and Kokujou enters and releases Kabane in the stronghold.

Kurusu tells Ikoma that his wound required precision to not kill him, making Ikoma realize Mumei was still there. As he informs Ikoma that Mumei will be used as Black Fog, he asks Soue to tell him more about the virus and he tells him that if they inject her with white blood, they can still save her. Meanwhile, Mumei walks into the stronghold seeing the death people and turns into Nue, taking all of them. Ikoma tells Soue to give him the black blood although it will accelerate the virus and shorten his life, it will give him power in order to kill Biba and save Mumei. Soue tells him that he won't turn into Nue as he is male and that he needs to take off his retrain or he won't realize his full power. Ikoma injects himself with the black blood and removes his restrain, and turns into Kabane.