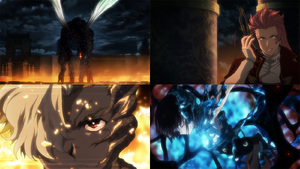 Biba's plan, Mumei's Nue transformation, and the influx of Kabane were all too much for Kongoukaku to withstand. Ikoma arrives, having modified his body once again, and enters Kongoukaku in order to rescue Mumei.

Biba's plan is a success and Kongoukaku is in ruins overrun by the Kabane. Ikoma and Kurusu enter Kongoukaku and draw the Kabanes attention towards them, killing as many as they encounter. Ayame reasons with the surviving humans, making them stop attacking each other in fear and offers them a chance to leave Kongoukaku with her people in the Koutetsujou.

Sahari notices Ikoma and notifies Biba, and then attempts to kill him, but with Kurusu's help Ikoma manages to take the Hunters. Sahari tries to run him over with Kokujou, but using his black blood power, Ikoma blasts the train and destroys it. Sahari goes to fight Ikoma up close, but Ikoma kills him. Ikoma manages to get closer to Mumei's Nue, but she is delusional, recalling old memories and seeing butterflies. As the black blood starts to overtake her, Mumei's Nue collapses. Ikoma reaches her, only to be intercepted by Biba. Biba stabs Ikoma and break his arm, but Ikoma, focusing his rage into energy, breaks his sword and pushes him away. Ikoma then loses his eyesight and hearing and Biba manages to sneak up on him, intending to finish him, but Mumei had realized Ikoma is nearby and calls for him. She then drops the memento stone from his sister. Ikoma hears it fall in the water and turns, hitting Biba and blowing up his arm, revealing that Biba is also a Kabaneri. Ikoma goes to Mumei and injects her with the white blood, disintegrating the Nue and saving her.

Mumei wakes up to find Ikoma collapsed nearby and Biba charging at him, intending to keep fighting or he will kill Ikoma there. He refuses to listen to Mumei, forcing her to pierce his heart as she tells him that sometimes she wishes he had listened to her. She tells him that even thought they are weak, they will continue living and strive for a future where they can eat rice. As he collapses, she tells him her name is Hozumi.

Meanwhile, Ayame and others wonder on how to escape Kongoukaku. Uryuu arrives and offers that if they let them on Koutetsujou, he will tell them. When Ayame agrees, he reveals that Ikoma and Kurusu are also in Kongoukaku. Kajika then uses the radio station announcements to call for them and tell them where they need to go to escape. Mumei and Kurusu then carry the unconscious Ikoma towards the Koutetsujou and manage to board it and leave Kongoukaku. The effects of the black blood start to diminish and Ikoma wakes up. Mumei realizes that Biba had given white blood to Ikoma while both of them were unconscious. Mumei then returns Ikoma's memento stone.