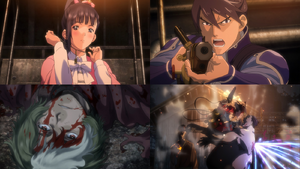 Ikoma somehow survives and heads toward the last Hayajiro left in Aragane Station, the Koutetsujou. Meanwhile, Ayame and her people were left behind to fend off the Kabane when a young girl named Mumei appears before them.

Ikoma somehow survives, stopping the virus from infecting him and keeping his humanity. Takumi arrives looking for Ikoma and Ikoma explains that his gun worked and that he got bitten but stopped the infection. Meanwhile, Ayame Yomogawa and other survivors fight a defensive battle against the Kabane and seek opportunity to escape to Koutetsujou. Mumei arrives in battle gear, offering to clear the way so Yukina, the only remaining engineer can commander the Koutetsujou. She heads into the Kabane group, leading them away and killing them.

Ikoma and Takumi attempt to board the train, but are stopped for inspection. Two Kabane appears and Ikoma wants to fight them, but Mumei arrives and kills them. She sees something's different about Ikoma and vouches for him, so he can board the train. Ayama gives her master key to start the train. Kurusu Konochi, bushi serving Ayame, wants Mumei to help they defend the train, but she refuses and falls asleep. Ikoma helps fending off a Kabane, showing his gun, but in the process, his shinning infected heart is exposed and Kurusu shoots him off the Koutetsujou. A group of Kabane gets on the train tracks and Ayame see its her father Kenshou among them. They run him over, but when they stop to lower the drawbridge, a Kabane body part was blocking the mechanism. Kurusu wants to go and lower the manual lever and while he argues with his subordinate, they see Ikoma fighting and killing the Kabane. Wanting to know they got saved by the man they abandoned, he goes and lowers the lever. The train continues leaving Ikoma, but Takumi and Mumei manages to get Ikoma back on the train. Kurusu gives Ikoma a suicide bag and wants him to kill himself, Mumei intervenes and reveals that they are Kabaneri - beings between human and Kabane.

Characters in Order by Appearance[]

中文
Community content is available under CC-BY-SA unless otherwise noted.