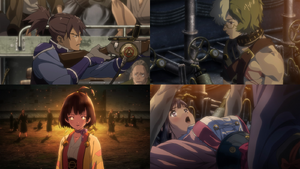 Prayer Offer (捧げる祈り, Sasageru Inori) is the third episode of Koutetsujou no Kabaneri.

Having escaped Aragane Station, the Koutetsujou heads for Kongokaku, the Shogunate's fortress. However, the people on the Koutetsujou quickly turn against Ikoma and Mumei and attempt to drive them off the train.

Mumei reveals she is a Kabaneri, Kurusu wants to kill her and Ikoma, but Ayame stops him and reminds them they were saved by those two. The Koutetsujou is headed for Kongoukaku, the Shogun's greatest stronghold and Mumei wants to stay onboard, promising to stay in the same train car. However, the passengers are not trusting the Kabaneri and are unhappy with the lack of enough food and water.

Mumei explains she is heading to Kongoukaku on a mission she can't reveal and that after fighting for a while, she needs to sleep to recover. Because of that she wants Ikoma to be her shield and protect her during her sleep. But since he is useless at the moment, she begins training him personally in preparation for future attacks. She feels a Kabane presence and rushes out of the car looking for it, causing panic among the passengers. She couldn't explain her reasons to Ayame for leaving the car, but then Ayame gets informed they are low on water and need to restock. They stop to fix the water tank and restock on water, Ayame uses the opportunity to hold a vigil by passengers previous request. Mumei wonders if Ikoma is going to pray and what is the stone on his hand as it hurts when he hits her with it. Ikoma tells how he lost his family and how his sister died from a Kabane attack five years ago. The stone was commonly found in the river around where they lived and he kept it as a memento for his sister.

A group of passengers gather planning on killing the Kabaneri and Mumei comes out to fight them. Ayame arrives and stops the fight, disappointed Mumei goes to the other passengers. Ayame attacks Ikoma to prove that he isn't an enemy and Ikoma tells her about his vow to his sister to kill the Kabane, appeasing the passengers' fears and making them disband. Mumei tells Kajika that she is hungry and since she is half-Kabane, she needs blood. That causes the passengers to fear her, but then a pregnant woman had turned into Kabane and Mumei proceeds to kill her. Meanwhile, Ayame apologizes to Ikoma for attacking him, but soon Ikoma passes out and as she tries to help him, he wakes up delirious from his own need of blood and tries to bite Ayame.