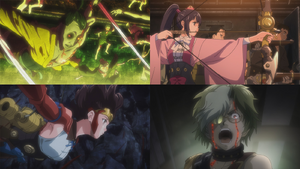 The other people lock Ikoma and Mumei into the rear car, despite them being two of the best fighters. Just then, the Kabane attack! And among them is a Wazatori, a Kabane that has the ability to learn and become stronger with each battle.

People were unable to understand what was happening as Mumei kills a pregnant Kabane woman which they thought it was human. Kurusu pushes Ikoma away from Ayame and Ikoma comes to his senses. A large group of Kabane then appears from the forest and they are forced to get back on the train and leave. As the fear of the Kabaneri grew, The Six Chiefs, led by Akouji, makes Ayame hand over the Master Key of Koutetsujou. Akouji then reroutes the train for the mountains to provide a shorter route to Kongokaku, in spite of being more dangerous path.

Takumi, Kajika and Sukari are considered traitors and are then send to the last train car with Mumei and Ikoma. By the Six Chiefs orders, some men try to detach the last car, however in that moment Kabane ambushes the train and jump on it. Among them is a sword-wielding Wazatori, who enters the train and starts killing people. Ayame and Kurusu then lead the bushi to fight and hold off the Kabane, until the surviving passengers escape to the front cars. Kurusu then fights the remaining Kabane with his sword skills. Meanwhile, Mumei and Ikoma escape the last car and move towards the front car while on top of the train, but Mumei soon falls asleep from exhaustion and hunger.

The Wazatori reaches Kurusu and he starts fighting him. As he attempts to pierce his heart, Kurusu's sword brakes and the Wazatori stabs Kurusu. As the bushi were barely holding against the Wazatori, Ikoma arrives and asks for blood in order to be able to fight the Wazatori. Ayame then slashes her arm and offers him her blood in exchange for he to fight for them. Ikoma then takes her blood and goes and easily kills the Wazatori with his gun. Ayame then regains the Master Key and declares that the Kabaneri will remain on the train and that she will be providing them her blood. As she alone won't be able to provide all the blood they need, Ikoma's friends and some others also volunteer to give their blood.