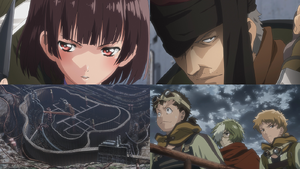 The Koutetsujou picks up survivors from Yashiro Station which has been destroyed by the Kabane. Among the survivors is Enoku, an old friend of Mumei's. He points out to Mumei how weak she's become as she's grown closer to the people of the Koutetsujou.

Ikoma helps the bushi by developing guns and swords capable of killing the Kabane. Two men cause commotion over argument for food and that annoys Mumei and scares the children, she then beats up both of them. Ayame calls her the bodyguard of Koutetsujou. The train arrives at Yashiro Station and they realize the station was attacked by Kabane and there are some survivors remaining. They rescue the survivors, who talk of a Black Fog before the attack. Mumei meets an old friend Enoku, a crippled fighter loyal to her brother, the Young Master. He tells her that the Shogunate is acting suspiciously and is stockpiling on weapons capable of only killing humans. He advises her to complete her mission while she is still human to not be throw out like him.

Debris is blocking the train tracks and Ikoma suggest a cautious plan using a crane to safely remove the debris. Mumei agrees to join them, but won't fight with them and insists on a head-on clash, calling them cowards. Ikoma leads a group of bushi and engineers to start the crane, but after seeing how Mumei ignores his warning and heads straight into the boiler room where all the Kabane are, he heads her way. Mumei enters the boiler room and starts fighting the Kabane, killing all of them, including a Wazatori, but as more appear, she goes after them. As Ikoma's group follow Mumei, they see they the large number of Kabane she took down. When Ikoma starts to activate the boiler, the Kabane that Mumei killed had provoked a large mass of Kabane that was located at the bottom of the station.

Ikoma calls for a retreat and decides he to stay and operate the crane. A weakening Mumei uses her remaining energy to fight and hold off the Kabane from the crane, but a melee Wazatori comes and throws her off the crane platform. Ikoma leaves the crane before clearing the debris and heads towards Mumei. He kills the Wazatori and reaches Mumei, but then after some tremors, a giant shadowy figure appears.