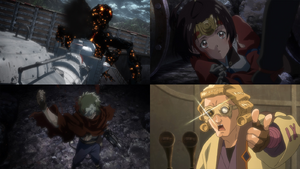 The Koutetsujou is standing before a giant cluster of Kabane, the Black Smoke, and all seems hopeless. Meanwhile, Ikoma and Mumei find themselves at the bottom of an abandoned station.

The Black Smoke is revealed to be a colony of Kabane fused together. Having no choice, the Koutetsujou retreats to the train station workshop and seal the door. Ikoma finds Mumei trapped under rubble and tries to get her out. Meanwhile on Koutetsujou the committee is discussing their options of escaping and whatever they leave the Kabaneri behind or not.

Ikoma fails to free Mumei and as Kabanes approach, he decides to leave them away and fight them, killing as many as he can. As Mumei loses and regains her consciousness, he recalls her past and how her mother died. Kibito, Kurusu and some others them come and clear the rubble freeing Mumei. Mumei then rushes to find Ikoma, who is badly injured and they return to Koutetsujou together. While the Black Smoke is distracted and takes in Kabane bodies, Mumei explains its Fused Colony. Sukari had noticed earlier a Type 48 Cannon and Koutetsujou had went and taken it. Mumei explains that a single Kabane had become the Fused Colony heart and that they need to expose it and she will kill it. Meanwhile, Ikoma had clears the debris from the tracks.