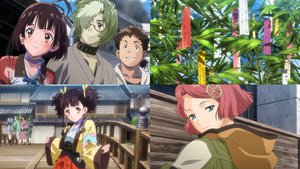 Begging the Heavens (天に願う, Ten ni Negau) is the seventh episode of Koutetsujou no Kabaneri.

The Koutetsujou arrives at Shitori Station, the first populated station it's encountered since leaving Aragane Station. Ikoma and the others go shopping for supplies, and experience their first moment of peace in ages.

Ikoma copies a sword move from Kurusu with Mumei commenting that Kabaneri are good copying others. Kurusu gets a bit annoyed and easily hits Ikoma to show him he haven't learned anything, but Takumi tells Ikoma to copy that move too, which annoys Kurusu even more. The Koutetsujou then arrives at Shitori Station and the passengers are happy to learn that the station is still occupied by humans. Ayame leaves The Six Chiefs in charge of the Koutetsujou while he meets the station lord. Ayama gives an item of value to that they can sell it and purchase bamboo for the Tanabata's ceremony so people can hang their wishes on it. Ikoma and the group goes for supplies.

Ayama is tired of waiting for the lord, so she makes Kurusu shoots one of his jet guns. That attracts the attention of the station minister, who after small demonstration is amazed by the jet guns and they exchange food provisions for the jet bullets technology intervened by Ikoma. Seeing the bamboo, Mumei remembers she had celebrated Tanabata before and runs away. When Ikoma finds her, she tells him her past and that her name was Hozumi. Ikoma promises her that he will turn her human again and that she will eat rice, just like her mother wanted her to do so.

That evening they start hanging their wishes on the bamboo. Seeing how small dreams people have, Ikoma shares his dream of killing all Kabane and Ayame reveals her dream is to reopen the Aragane Station. Followed by their example, everyone starts sharing their dream.

The next day, the hayajiro Kokujou arrives with the Hunter squad, an independent army formed to hunts Kabane, led by Biba Amatori, the shoguns son and Mumei's "big brother". However, Ikoma is suspicious of Biba and wants to find out if he is really a hero or something else.