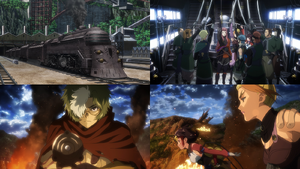 The older brother Mumei serves is Biba Amatori, leader of the Hunters - a special division dedicated to hunting Kabane. However, while the people praise Biba as a hero, Ikoma does not trust him.

Mumei introduces Biba Amatori to Ayame and he reveals he is Mumei's "big brother" in name only and that he is no longer considered the shogun's son. Ikoma tells Biba he knows him as the one that told Mumei the weak must die. Biba then invites them inside the hayajiro to talk, but on his way there he stops to help out with some train repairs and Ikoma decides to help too. Meanwhile, Uryuu seemingly attacks Ayama and Kurusu, but he was just killing a spider. Biba tells Ikoma that he isn't casting anyone away, but trying to save them, just like how Mumei decided to save herself by fighting the Kabane.

Kabane had been led to the station and they attack it. Biba hen leads his hayajiro outside of the station and deploy his troops, easily destroying all Kabane. Mumei and Horobi, another Kabaneri, team up to take on a Wazatori Kabane who was using two other Kabane as shields. Enoku emerges behind Biba telling him he can still serve him, but Biba kills him as he had seen through his betrayal, which Ikoma sees and gets angry. Meanwhile, Sahari deals with the other men that were plotting Biba's assassination with Enoku. Biba offers Ayame, Kokujou to accompany Koutetsujou to Kongoukaku, which she accepts.

Ikoma speask with Takumi and tells him he believe that Biba had turned Mumei into a Kabaneri for his own purposes and feels the presence of Kabane in the front cars of Kokujou. Meanwhile, Biba gives Mumei orders to get Koutetsujou's Master Key from Ayame. Biba then questions one of the men that plotted against him, Hirotsuka, on who's orders he was left to die 10 years ago and the man reveals it was by the Shogun's orders. Mumei manages to get the key, but have been tricked by Yukina, who gave her a fake key. Ikoma goes to the front cars and Mumei is told that if he enters, they will have to kill him. She goes out and reveals that the Kabane are there for experiments and that she became Kabaneri on her own will and refuses to go with Ikoma. As Mumei leaves, Ikoma tells Ayama and Takumi that Biba isn't a hero, as he was smiling when he killed Enoku. Meanwhile, Biba kills Hirotsuka and smiles again.