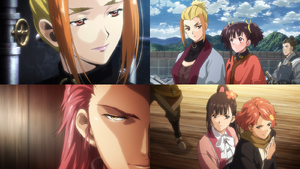 Fang of Ruin (滅びの牙, Horobi no Kiba) is the ninth episode of Koutetsujou no Kabaneri.

The Shogunate closes off the path to Kongoukaku because they are wary of Biba and the support he's managed to garner. Biba seeks an audience with the Lord of Iwato Station, though with less than pure intentions.

Kokujou and Koutetsujou arrive at the Iwato Station, the last before Kongoukaku, but by the Shogun's orders, the samurai are preventing entry for Kokujou and Biba. Ayame is relieved that they are parting ways with the Hunters and asks Ikoma to get Mumei. Lord Maeda, leader of the fortress agrees to a meeting with Biba on the condition that only women and children accompany him. Ayama is meeting with Maeda first, when Biba comes with Horobi and Mumei. As the meeting starts, Mumei leaves saying that she needs to go to the toilet, Takumi sees her and informs Ikoma. Mumei goes and lowers Iwato Station's drawbridge, believing she is only letting Kokujou inside as per Biba's request, but then sees how Biba's men bring Biba's Kabane inside Iwato.

As the alarm for Kabane rings, Biba and Horobi takes out Maeda's men and Biba then proceeds killing Maeda. Mumei is horrified by what her actions had led to. Kurusu goes to find Ayame, but sees she being taken as hostage by Biba on Kokujou. Biba's men then proceed to kill the Bushi at the station as retribution to the Shogun's cowardice over the past ten years.

Biba injects Horobi with a blue blood serum so that she can become the heart of a Fused Colony, a Nue, and she starts gathering Kabane to form the beast. Horobi manages to destroy the gate and open a path towards Kongoukaku. The Kabane virus overtake Horobi, leading to dissolving the Fused Colony, Soue Arata comments its too late to save her by giving her white blood. Kurusu comes to Ayame rescue, but falls off the train with Soue.

Becoming Kabane, Horobi turns against Biba's men and starts killing them. When she faces Biba, she stops her attack and comes to her senses, however Biba then kills her without mercy as she had served her purpose. Biba's men capture all remaining Bushi and Koutetsujou passengers, along with Ikoma as Biba is interested in his blood. Seeing all the destruction, death and Biba's actions, Mumei realizes that all he had told her was a lie.