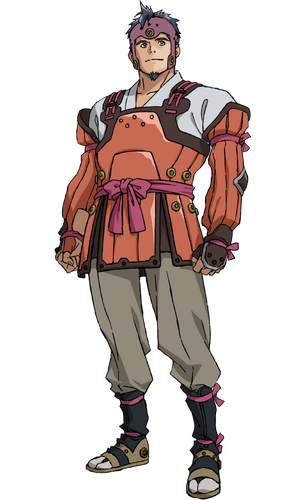 Kibito Araka (吉 備 土, Kibito) is a bushi for the Yomogawa family who now serves Ayame on the Koutetsujou. He is a calm and cheerful man who keeps a level head in the worst of situations.

Kibito is a very tall man with a muscular build with strong facial features, towering above most his peers. He has short blue hair tied in a short forward-facing tail and brown-golden eyes, along with a sharp goatee.

He is typically seen in his bushi armor, an orange plated cuirass and padded sleeves over a white shirt and khaki pants, complemented by brown gloves and black boots. He most always wears a purple armored faceplate.

Kibito is shown to be not only rational but quite sympathetic to most people, empathizing with the Kabaneri's plight and willing to trust and work alongside them after witnessing their efforts to protect the passangers of the Kōtetsujō, keeping a mostly positive and relatively upbeat attitude towards the whole situation. Cool headed and rational, he seems quite devoted to his job, being often seen beside Kurusu leading the charges and stands of his fellow bushi. He is quite protective of his brothers in arms, not thinking twice before jumping into a hail of gunfire to drag Kurusu's wounded body away from a Wazatori swordsman himself.[1]

Kibito is mostly seen alongside the remaining bushi offering covering fire and guidance as the populace of Aragane Station evacuate towards the Kōtetsujō, focused on the task at hand and only having minor interaction with Kurusu in order to get everyone on the same page during the train's departure preparations.[2] As the passage is open and they manage to escape the lost station safely, Kibito and Kurusu are seen discussing their travel to Kongōkaku Station and the implications of such as they run maintenance on their guns, mentioning the possibility of the station not even allowing them passage before being interupted by Kajika offering them food.

While sympathetic to their plight, Kibito prevents Ikoma and Mumei from becoming involved in the defense of the passangers against a pack of marauding Kabane as most people still possessed a heavy stigma against the Kabaneri due to their biology. Later, when the Wazatori and the rest of the Kabane ambush party attacked the Kōtetsujō again during their mountain shortcut, Kibito personally saw to Ayame's security alongside Kurusu until his defense line comes against the Wazatori swordsman. Kurusu gets stabbed in the abdomen by the Wazatori, badly disabling him, and Kibito orders a barrage of rifle fire in order to cover him as he rushes to his comrade's side and drags him to safety.[3] After the fight's conclusion and the victory celebration, he was one of the train's crew who offered his blood for the Kabaneri to drink from.

Soon after, he is present when the bushi are live firing Ikoma's customized steam rifles to test their explosive rounds upon their approach to Yashiro Station. Planing their move for a day, he leads the bushi into the station's bowels alongside Ikoma, and while forced to change a threadbare and dangerous plan due to Mumei's impetus, he keeps a stoic facade and marches on in order to keep everyone's attention focused. The boiler room doesn't offer resistance courtesy of Mumei massacring the Kabane to a man inside, but one of his comrades calls out the formation of a fused colony, prompting the party to evacuate as quickly as they can. Though he makes it back without a problem, Ikoma and Mumei end up being trapped in a mine shaft as the plan's unraveling causes severe issues for everyone involved. Fortunately enough, Kibito manages to lead a safe retrieval for both as the Kōtetsujō salvages a tank turret to retrfit into its car, bringing both on board once more. He is present in the fight against the colony, who has taken to pursue the train at any cost, and manages to repel it long enough for Takumi to blast the surrounding chaff apart from its core, leaving mumei the perfect shot and ensuring the train's escape.

Retrieved from "https://koutetsujou-no-kabaneri.fandom.com/wiki/Kibito?oldid=5953"
Community content is available under CC-BY-SA unless otherwise noted.