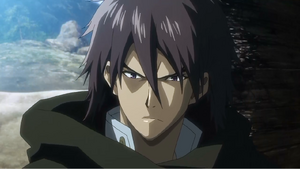 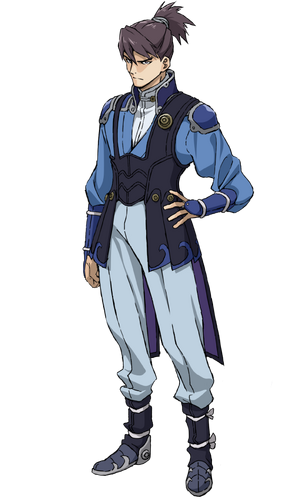 Kurusu (来栖, Kurusu) is the tritagonist of Kabaneri of the Iron Fortress. He is a bushi who serves the Yomogawa family as Ayame's personal bodyguard.[2] He is usually somber and honest, vehemently upholding his code of honor and duty as a bushi.

Kurusu is constantly seen with a somber, serious countenance and a well kept appearance, his hair up in a single short tail and clean shaven. He wears a white shirt under a light blue jacket. He wears what seems to be a dark blue tailed vest that protects his midsection and holds down his blue shoulder plating. He wears blue vambraces and greaves over white trousers, his boots reinforced with metal at the soles and heels.

When not equipped with a steam weapon, he constantly carries his blade at his side.

Kurusu takes his job extremely seriously, honoring his profession and social class to the extreme, always ready to put his life down for the common folk and his liege lord. However, he seems to remain close-minded due to the general deep-rooted fear people hold against the Kabane and the prevalent do-or-die attitude regarding the struggle against them. This extends to the point of remaining distrustful of Mumei and Ikoma even after witnessing both their personal involvement in keeping the Koutetsujou and its passengers safe.

However, Kurusu has shown signs of humanity and has shown to eventually change his thoughts regarding the Kabaneri. His humane side is revealed mostly through Ayame, such as when he was flabbergasted when she tried to read what he had written down for his wish during one of the episodes.

Kurusu is presented one of Lord Yomogawa's foremost servants, accompanying him to the Koutetsujou's inspection upon its early arrival to Aragane Station. After a brief and violent exchange between a hysteric and presumably infected crewman and the bushi, he puts Ikoma down following his passionate outburst over the senseless death sentence the crewman was gunned down with. He personally arrests Ikoma and seems to remain by Lord Yomogawa's side throughout the day until the station was breached by the Kabane and the now-hijacked Fusōjō. He attempts to man the defense of the station until it becomes clear there is no stopping the Kabane onslaught, at which point he is tasked with Ayame's protection as Lord Yomogawa himself attempts to reach the Koutetsujou. As the fighting intensifies, Mumei appears to give the besieged bushi a break, taking the fight to the Kabane and luring them away while the local populace makes their way to the Koutetsujou under Kurusu and Ayame.

Seeing Ikoma free from his cells and already by the train, he demands a physical inspection at gunpoint, but his worries are dismissed by a tired Mumei who explains Ikoma is not a Kabane. Inside, the bushi attempt to put down some semblance of order in the Koutetsujou, taking up defensive positions and repelling the onslaught of Kabane now dedicated to stop the train. Kurusu identifies an afflicted Lord Yomogawa on the tracks among several other Kabane, and tries to stop Ayame from witnessing his cruel fate, telling her that he is just a Kabane and not her father. Acting as the de facto captain of the train given Ayame's inexperience, he scours the train cars for Kabane threats, seeing Ikoma's glowing heart after the former had protected the people in one of the cars from a Kabane stuck on a door, but revealing his torso as he did so. Immediately classifying him as a target, he shoots Ikoma out of the train despite Takumi's protests.

Though the Koutetsujou had become mobile, Kabane gore had rendered some of its external switches unusable, not least of which the one controlling the drawbridge of the Eastern Gate. Kurusu suggests going out himself and lowering the bridge for the train, harshly chiding his men when they mention the suicidal nature of such an act for their cowardice, reminding them of their duty and status as samurai. Ironically, he then witnesses Ikoma putting his own life on the line for the same purpose, and managing to accomplish just that. Nevertheless, he approaches him once again after Takumi pulled him on-board once more, throwing him a suicide charge and admitting that while he feels no shame in being saved by him, he should still perish for the good of the people on board, and that if Ikoma wouldn't take his own life, he would. Mumei abruptly interrupts once more, claiming that Ikoma was no Kabane, but a Kabaneri instead, revealing herself to be one as well. Not convinced, they get into a tense standoff until Ayame puts an end to it and a minor agreement is made between the Kabaneri and her, and while it is quickly broken due to necessity, Kurusu is once again pulled away from the standoff by greater circumstances.[3]

As the Koutetsujou is damaged and in dire need of repairs before continuing to its destination, a funeral is held for those lost in Aragane Station. Kurusu is seen at attention watching the ceremony while practicing his swordplay, seeming tense and remorseful.[4] He is seen once more barely arriving in time to save Ayame from a hunger-crazed Ikoma as he was about to feed upon her, violently reprehending him and once more ready to put him down - only relenting upon Mumei's warning of incoming Kabane in the night.

As the Koutetsujou takes off once more, the latent tension from the Kabaneri's presence and Ayame's initial incompetence at a leadership role comes to a boil as the Six Chiefs demand the key to the engine. Despite vocal protests by Kurusu, the key is handed over, leading to the decision to use a faster but much more dangerous mountain route. As expected, the Koutetsujou is ambushed and Kurusu takes to the front as the bushi leader. The fighting becomes gruesome as the Kabane manage to slip inside the train cars and begin butchering civilians and bushi alike, among their numbers a Wazatori swordsman. Reaching Kurusu, he and the Wazatori do battle for a short while, Kurusu managing to outmaneuver and outduel his undead rival, but the final thrust of his blade failed to pierce the Wazatori's heart, snapping Kurusu's katana apart and leaving him wide open for retaliation; he is swiftly impaled through the stomach, and only spared from death as Kibito and the bushi open fire on the creature before it has the chance to deliver a killing blow. Recovering consciousness not long afterwards, he immediately assists in the fight once more as he rushes the Wazatori and impales him with a jagged steel pipe through the stomach in grim retribution, buying Ikoma and Ayame enough time to collect themselves. Ikoma, now sated with blood, finishes the Wazatori off. Even with his reservations about the Kabaneri, he volunteers to donate blood along with the rest of the Koutetsujou's crew.[5]

As they approach Yashiro Station, Kurusu is still recovering from his injuries. For the most part, he remains inside the Koutetsujou, having Kibito take to the frontlines and command the bushi. When the rumors about the "black smoke" reveal themselves to be a fused colony however he returns to active duty, taking up Ikoma's Kabane-reinforced katana and protecting the train's newest tank turret as a joint effort between it and Mumei brings the colony down and allows them to safely escape the station and continue towards their destination.[6]

Upon arriving at Shitori Station, Kurusu, along with Kibito, attend to duties with Ayame to meet with the lord of the station. While waiting outside the meeting room, Kurusu and Kibito discuss how the lord is late and wonder if it is due to the reason that food is scarce at the time or the lord's unwillingness to negotiate. Kurusu decides to go talk to Ayame but discovers her indulging in the food that was offered to her. Ayame becomes immediately embarrassed at being seen stuffing food into her mouth, while Kurusu, who is shocked and flustered, apologizes for intruding and shuts the door. He tells Kibito that they should wait a little longer. As the minister of Shitori Station, Yamazaki, and two servants are passing by, Kurusu fires a shot into the air, alerting them to their presence. Ayame introduces herself and offers jet bullets as a gift for Lord Shitori. Kurusu demonstrates the potency of the bullets by firing a shot at a iron plate. Yamazaki and his followers are amazed at the sheer power, assessing how the jet bullets could penetrate a Kabane's heart cage. Ayame also says how she is willing to include blueprints of the bullets if they are interested, since she believes it's only natural to help others in times of need. Her charm wins over Yamazaki, and he promises to give her food provisions and take in the sick and injured in her group. During the Tanabata celebration aboard the Koutetsujou, Kurusu helps shave paper with his sword for people to write their wishes on. When Ayame divulges her wish to her group, people laugh, making her wonder if her wish was strange. Kurusu tells her that her father would be proud of her wish to Ayame's delight. When questioned by Ayame about his wish, Kurusu becomes embarrassed and hides his paper behind his back, stating that his wish won't come true if other people see it. Kurusu watches the fireworks, lit by Shitori Station, alongside Ayame and the rest of the crew.

Weapon Proficiency: Trained in steam arsenal use and swordplay, Kurusu seems to be highly proficient at both.

Peak Agility and Reflexes: Kurusu has shown impressive feats of physical prowess, such as having quick enough reflexes to parry a lead ball thrown at lethal speeds by Mumei herself with just the barrel of his steam rifle and outmaneuvering a Wazatori swordsman.

Kurusu is Ayame's personal bodyguard and only real pillar of support after the affliction of her father by the Kabane Virus. Though cold and pragmatic in nature, he does seem to display genuine affection toward Ayame, even if he tempers it with his usual stern facade. It has also been hinted a few times that he may also harbour romantic feelings for her.

Entirely distrustful of both him and Mumei at the start of the series, Kurusu considers them a burden and a real threat. Though his prior contact with Ikoma wasn't more than a simple arrest for his insubordination, since the former's transformation into a Kabaneri, Kurusu has always made it clear he will kill him without reservations should he present himself to be a danger to anyone aboard the Koutetsujou. Kurusu gradually begins to trust Ikoma, offering his blood for the latter's nourishment and remaining on at least cordial terms with him.

Retrieved from "https://koutetsujou-no-kabaneri.fandom.com/wiki/Kurusu_Konochi?oldid=6072"
Community content is available under CC-BY-SA unless otherwise noted.