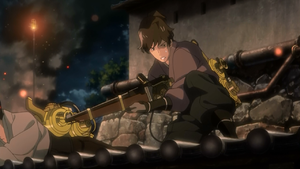 Momoya was a Bushi serving at Aragane Station.

It is unknown what kind of personality he had, but before he died, he showed loyalty to Ayame.

While defending from the Kabane, one of them grabbed his gun and pulled him down, where the Kabane devoured him.[1]

Retrieved from "https://koutetsujou-no-kabaneri.fandom.com/wiki/Momoya?oldid=5586"
Community content is available under CC-BY-SA unless otherwise noted.