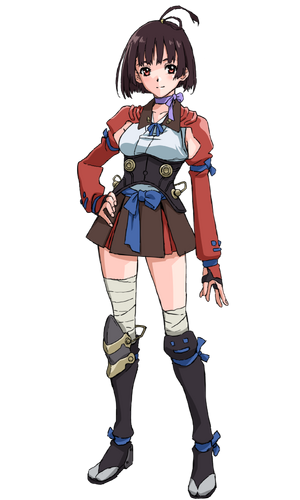 Mumei (無名, Mumei) whose real name is Hozumi, is the main female protagonist of Kabaneri of the Iron Fortress. A mysterious and anonymous girl whom later reveals herself to be a Kabaneri. She is the adoptive younger sister of Biba Amatori, leader of the Hunters.

Upon visiting Aragane Station, she meets Ikoma, a fellow Kabaneri and the two board the Koutetsujou where they proved their allegiance towards Princess Ayame Yomogawa and began their journey towards Kongoukaku.

Mumei is a girl with short brown hair and reddish-brown eyes. She wears an indigo ribbon tied tightly around her neck, which suppresses the Kabane virus. Removing the ribbon enables her to access her Kabaneri abilities fully.

Her back is home to a large scar. When active, the scar glows a fiery yellow, in the same way that a Kabane's body glows.

Mumei generally acts much like a child and can sometimes be seen playing with toys. Even when fighting Kabane, Mumei treats any situation as though it is a game. Despite her apparent immaturity, she understands her strength as a means to protect others.

Although she is rather detached and even ill-mannered towards others, she appears to take interest in Ikoma.[3] Mumei appears to have a soft spot for children as well.

Mumei may also give a sense of terror or eeriness when it comes to small situations that doesn't seem too important to her, which may be a factor from her past, like when she tells the family that it was supposedly good that they lost their dog to the Kabane, or when she asked one of the women at the time of fix up and prayers at the Koutetsujou for their blood like it was nothing to her, but was obviously a somewhat threat to them.

She also tends to express or state quotes that her "brother" may have expressed when she was younger, like "May karma smile upon him/her".

Hozumi was born in Hinomoto, originally she resided in a station and was raised by her loving mother whom gave Hozumi's name as she wished to feed her daughter as much rice as she wanted; an impossiblity as, to her knowledge, all the rice paddies were lost to the Kabane outbreak.[4] As a child, Hozumi often watched alongside her mother when people died, butterflies surrounded their corpses, where her mother told her that the butterflies would help guide their souls into the afterlife.[5]

Mumei first appears in Argame Station as a guest of Kenshou Yomogawa, head of an affluent family. She witnesses Ikoma defending an innocent civilian from the Bushi and his subsequent arrest. While her caretaker, Shimon, is meeting with Kenshou, she sneaks away to speak to Ikoma in his cell. She is impressed with his earnest distaste towards humans killing other humans out of fear, but leaves Ikoma when a Fusoujou engine hijacked by Kabane crashes into the station.

She is led away by Shimon, who reasons that her mission to reach Kongoukaku at the behest of her "brother" is more important than defending the station. He, however, is revealed to have been bitten by a Kabane and subsequently commits suicide, leaving Mumei to reach the Koutetsujou by herself. She encounters a stray Kabane, whom she kills with a single kick.[6]

Mumei reaches Ayame and a group of survivors before their garrison is overrun. In order to allow them to reach the Koutetsujou, Mumei engages the Kabane horde herself and quickly defeats them. Afterwards, she meets with Ikoma before boarding the engine, but suspects him to have changed since their last meeting. She enters the Koutetsujou, but decides to fall asleep instead of keeping watch over the train, apparently exhausted by her fight.

When Ikoma is thrown off the train, he lowers the drawbridge for the train despite his abandonment. Although he is beset with despair at his own apparent transformation into a Kabane, Mumei leaps off of the train to rescue him. When they board Koutetsujou again, she defends him from Kurusu's group, revealing that Ikoma and herself are Kabaneri -- something in between a human and a Kabane.[7]

After a tense standstill with Kurusu and the other guards, Ayame defends Ikoma and Mumei, who agree to remain in the rear car of the train. During their isolation, Mumei declares that Ikoma be her shield aboard the Koutetsujou and suddenly begins "training" Ikoma to fully utilize his newfound Kabane strength. She however senses a Kabane on-board the train and leaves the car to find it, which angers Kurusu and the passengers. However, the conflict is ended when the train stops for repairs.

Mumei listens to Ikoma's story about losing his sister, which she says is a common story. She confronts a small mob set on killing her and Ikoma, but leaves when Ayame ends the standoff. She plays with the children, but tells the others that she needs blood to sustain herself. Unbeknownst to the others, Shino, a pregnant woman, had been bitten by the Kabane and finally turned. Mumei quickly kills her, despite Kajika's attempts to stop her. Mumei is shaken when she finds out that Shino was pregnant.[8]

She stops the conflict between Ikoma and Kurusu by warning that Kabane are nearing the locomotive. As Ikumi falls to the ground, Mumei notes that he is probably hungry, also stating that she is hungry as well. While other smiths are thrown into the same car as her and Ikoma, she approaches Kajika, demanding later to supply her with a dose of blood. Some of the civilians attempt to detach their car from the rest of the locomotive, but are soon interrupted by a horde of Kabane led by a Wazatori.

Mumei accepts Ikoma's suggestion to eliminate the Wazatori themselves. The group concludes their time of attack. Mumei and Ikoma eliminate a group of Kabane on the top, rendering Mumei weakened and unable to proceed to the pack leader. She says that she puts her trust in Ikoma, and that his death would certainly inconvenience her.[9]

Mumei stopped the fight between to civilians, beating them up before scolding them for their actions. As the train arrives at an attacked station, Mumei noticed an acquaintance in the survivors. He gave her the sign to follow him outside in order to speak. The two had an unfriendly conversation, the man apparently knowing and serving her "brother", berating her for not serving him well. He attacked her while she parried with a knife, saying that she only has value while she slaughters Kabane. In the locomotive, she tried to comfort a kid due to his dog's death, saying that it was a good thing as he was able to die with a severe injury, but is quickly confronted by the other civilians.

When Ikoma formed a plan to move the crumbled construction from the passage in order to proceed with their trip, Mumei disagreed with the plan and wanted to go and attack the center of the crane infested with Kabane. She is later visited by Ikoma, and the two have a brief argue before Ikoma leaves her alone.

Already exhausted, Mumei tried to support Ikoma as he operated the crane, only to get overpowered and thrown off the construction by a Wazatori. As Ikoma tried to rescue her by going to the underground passage, they both get crushed by rocks of the crumbling construction.[10]

Mumei is found by Ikoma under the rubble, Ikoma using various dangerous methods to get her out. Mumei feeling the fact that she is weak, she is under pressure and receives a sensation that she is turning into a Kabane, Ikoma then nourishes her with blood and she calms down. Ikoma then hears approaching Kabane and gets ready for battle. He then cuts his arm to attract an amount of Kabane, then uses a suicide bag effectively to kill the Kabane by crushing them instantly. Mumei then (in perspective) passes out, and then she flashbacks to a time where she's young with her mother and father (maybe).

At the time the Kabane have overrun the city and there in a shelter where a stranger or her father is protecting her and her mother from the Kabane. The man is turned at her mother, the stranger/her father is shown to snap and go insane to the point of killing regular humans (and possibly his own family).

Mumei's mother had blocked the shot the strange/her father took to Mumei, and is shot bleeding to death. Mumei in horror is traumatized yelling out for her mother. The stranger/her father then aims for her, Mumei in shock, the weapon is shot out of the stranger's/her father's hand by a blurry figure that resembles Kibito. She then regains consciousness in the presence of the Bushi members. Kibito then comforts her, telling she'll be healed. Afterwards Mumei questions where Ikoma is, she finds him laying the the ground, pushing him back and forth until he responds as he states that a Kabane had bit him by the stomach.

They are discovered by a Black Smoke and escape immediately before anything can happen, but leads it to the Hayajiro Koutetsujou, on the train Mumei meets the family that she said was good that their dog died and apologized and the family's child that she is her guardian/protector, she then gets ready for battle. The Black Smoke starts to chase their train, on the top of the train, the whole train suffering from battle loses a train cart, luckily Takumi makes a shot to its heart and it's positioned where its central manufacturing is exposed.

Mumei power-jumps to the exposed heart and finds a supposed controlling Kabane that has the features of being made all of metal. Mumei then completes the mission of killing the Black Smoke by killing the controller and it explodes, thus saving the train, later being caught by Ikoma in mid-air.

Mumei is a Kabaneri, which grants her superhuman abilities. She is fast and nimble enough to leap across rooftops, and strong enough to fight Kabane in hand-to-hand combat. She first displays the full extent of her abilities when she single-handedly kills several Kabane with limited ammunition and melee prowess, during a time in which fully killing Kabane was thought to be near-impossible.

Enhanced Strength: She was able to singlehandedly sever the head of the Kabane, and is capable of knocking down a fully grown man, as well as Ikoma.

Enhanced Speed: By removing her "limiter", Mumei's speed is enhanced to superhuman level. She was able to tear through a horde that attacked the Aragane Station and quickly ambush and kill the Kabane infesting the top of the locomotive.

Enhanced Reflexes: As a Kabaneri, Mumei's reflexes are also evidently increased. Mumei is capable of dodging and parring many attacks thrown at her, despite her appearance.

Enhanced Senses: Mumei has keen senses that are superior to those of humans. She was the first one to notice the change in Ikoma only by smelling him, and is also able to sense the turning Kabane from a long distance.

Mumei is most powerful when she releases her restraint, in the form of a pastel purple ribbon around her neck. However, after fighting without her restraint for long periods of time, she becomes extremely tired and falling asleep right away. Also, her hunger for blood also grows.

Retrieved from "https://koutetsujou-no-kabaneri.fandom.com/wiki/Mumei?oldid=6134"
Community content is available under CC-BY-SA unless otherwise noted.