Koutetsujou no Kabaneri -Kabaneri of the Iron Fortress Wikia
Register
Don't have an account?
Sign In
Advertisement
in: Weapons and Equipment
English

Steam Gun (蒸気銃, Jōki jū) or Steam Cylinder/Tube (蒸気筒, Jōki-zutsu) is a steam weapon commonly used by Bushi to fight off the Kabane and guarantee the safety of the citizens, developed from the same technology as the steam engine. It was mentioned by Ikoma (while talking about how his tsuranuki Zutsu is superior) that the "Steam Gun" uses "lead shots/bullets". It is unknown at this time who invented the gun but the weapon is based on the design and function of several weapons including the air gun, paintball gun, musket and lever-action repeating carbine. The front end of the gun is based on the cavalry carbine musket and the end is inspired with a lever-action Winchester.

The Steam Gun is connected to portable boiler to create pressure, known as Backpack Engine (背負い機関, Seoi kikan). It is connected to a pressure gauge, and it releases steam from the exhaust after every shot. The ammunition is based on paintball tac-pod. The tac-pod is inserted upside down into the loading chamber that is connected to the barrel of the gun. After firing a shot, another bullet is cocked into position with the lever before firing is possible. While the weapon seems to possess considerable power, the weapon requires multiple shots to penetrate the iron around a Kabane's heart. With the help of Suzuki, Ikoma was able to miniaturize the technology of his Tsuranuki Zutsu to create "jet bullets" capable of piercing a Kabane's heart in a single shot at range. This enable the bushi on the Koutetsujou to take on the Kabane on a more advantageous footing. Steam Guns have also been upscaled to create large Steam Cannons such as the Type 48 that was used by the Koutetsujou to take on a large Fused Colony at Yashiro Station.

The Steam Gun has been modified through the progress of the show, with a experimental drum magazine style tested by Mumei at the start of The Battle of Unato. 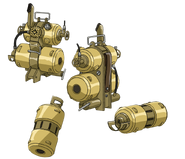