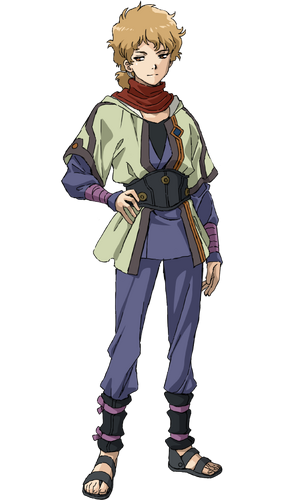 Sukari (巣刈, Sukari) is a Steam Smith who lives at Aragane Station. He puts up a cynical front, but has good judgement.

He puts up a cynical act, mocking Yukina and his fellow smiths, but has good judgement and is willing to help even in times of grave danger.

Sukari participated in the Koutetsujou's intialization, asking Takumi whether the machines work properly.[2]

When the Koutetsujou makes a stop in order to gather water supplies and for people to pray for their dead, he mocked one of workers for praying and not doing his job, saying that prayers won't resurrect the dead. He is soon interupted by Yukina, who says that she will do it instead. Sukari asks whether she lost someone, and Yukina responds that she lost her teacher. Sukari teasingly questioned if she was close with her teacher, as Yukina angrily bashed him against the train with the metal plate they were carrying.[3]

When the train is taken over by the Six Chiefs, Sukari and the rest of the smiths are thrown into a car containing Kabaneri under the excuse of "sympathizing" with them. Sukari is angry at the civilians for expelling him with them. However, after another pack of Kabane attack the vehicle, the group forms a plan on how to eliminate the threat.[4]

Sukari and Takumi are tasked to control the crane while the others repel the Kabane and activate the boiler in order to remove a tower that is blocking the railroad. However, the two are forced to retreat by Ikoma, who said chooses to manage the crane in their stead due to an approaching horde of Kabane, protecting them from the risk of getting bitten.[5]

When Ikoma and Mumei are trapped inside a collapsed cave, Sukari and the others retreat from the black smoke and forced into the iron drawbridge of the Yashiro station. When plotting an escape plan to both leave the station and destroy the black smoke, Sukari is told by Yukina that a body part of a Kabane is stuck in the gears, preventing the train from going faster. After making the statement to himself ''this is my unlucky day'' he successful removed the body part and got back in the car safe and sound.

Retrieved from "https://koutetsujou-no-kabaneri.fandom.com/wiki/Sukari?oldid=6098"
Community content is available under CC-BY-SA unless otherwise noted.