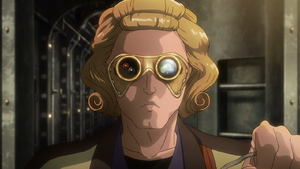 Suzuki Tanzaemon (鈴木, Suzuki) is a Steam Smith of the Koutetsujou.

Though "Suzuki" is a common Japanese family name, he looks like a Westerner, and speaks non-native Japanese mixed with English in the anime.

Suzuki has blonde hair with English curls on the side.

He is often seen as being much shorter than the rest of the people. Suzuki is never seen without those visors yet.

He is very serious and is very dedicated to his job.

While he speaks Japanese fluently, his accent can be clearly heard and he also inserts English words, or uses whole phrases in his speech, pointing out a possible foreign origin.

Suzuki is often seen doing mechanical jobs on the trains

As inferred from the show, he is someone who is a highly capable steam smith, possibly from learning in the western world and traveling over to Japan with his knowledge

Retrieved from "https://koutetsujou-no-kabaneri.fandom.com/wiki/Suzuki?oldid=6058"
Community content is available under CC-BY-SA unless otherwise noted.