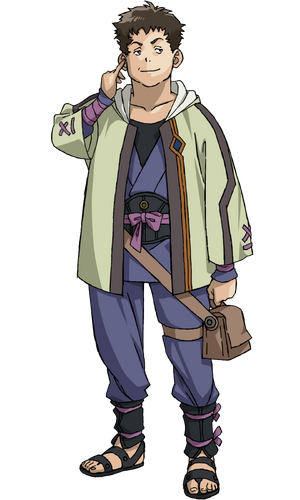 Takumi (逞生, Takumi) was Ikoma's close friend and a former fellow Steam Smith. Though he's shocked by Ikoma's rashness, he admires how Ikoma isn't afraid of anyone.

He was a chubby man who wore a black shirt with a blue robe. Over it, he had on a lime green jacket. He had black sandals on his feet and had brown hair.

He was an ordinary kind of person, just followed orders, did what the higher ups said and had no questions about it. However he has shown to be able to stand for the sake of his friends even against the belief of the many.[2]

Takumi worked at the Steam engines while being approached by Ikoma, who informed him about the trial he executed on his imperfect gun. Takumi suggested Ikoma to implant additional explosive power. Later on, the duo is tasked to repair the Koutetsujou, as Takumi berates Ikoma on looting the cartoid artery for his Kabane research.

After Ikoma got arrested for defending a suspicious civilian that was accused of being a Kabane, Takumi is seen having lunch with his fellow smiths, berating Ikoma for his actions, saying that he is a self-righteous idiot.

Takumi looked out for Ikoma after the attack on Aragane Station, meeting him in an old cottage. He is surprised to see his friend killed a Kabane, but even more so when his friend reveals that he has been bitten and that he still retained his humanity.[3]

While boarding the Koutetsujou, Takumi and Ikoma are attacked by two Kabane, who are killed by Mumei. After being approached by the guards, they board the locomotive.

When Ikoma's Kabane heart is accidentally uncovered, Takumi and the rest of the civilians observed in fear, however, when Kurusu tried to throw Ikoma out of the locomotive, Takumi hopelessly attempts to stop him, mourning for his friend after he was thrown out. After Ikoma unblocked the bridge and saved everyone in the Koutetsujo, Takumi threw a hook for Ikoma to save himself, and is soon aided by Mumei.[4]

Takumi and the rest of the smiths are thrown into a car with Kabaneri after the civilians take the locomotive over, returning the gun to Ikoma. Ikoma suggested that he and Mumei clear the top and deal with the Kabane that are currently attacking the Koutetsujou, and Takumi and the rest of the group forms a plan to eliminate the threat. Takumi is present when the group celebrated the triumph over Kabane.

When Ayame declares that the two Kanaberis will arrive to the Kongoukaku alongside civilians, Takumi willingly offered his blood in order to sate his friend's hunger.[5]

After being captured along with the rest of the people on the Koutetsujou, he and Ikoma stared a revolt with Ikoma and the rest. He died shielding Ikoma from Biba shot.

He was present when the group gathers to see Ikoma's progress on upgrading the gear, proudly looking at his work.

Takumi and Sukari are assigned to operate the crane while Ikoma lights the boiler. They notice the boiler working and immediately proceed to control the crane. However, they are soon interupted by Ikoma, who claims that he will manage the crane while they retreat, as a large herd of Kabane is approaching them.[6]

It is also mentioned that he participated in multiple researches and experiments with Ikoma on the Kabane and the Kabane Virus.

Ikoma is Takumi's best friend. Having unwavering faith in him, Takumi is willing to stand up for Ikoma, even when he was outcasted as a Kabane. When they were fighting together, Takumi gave support to Ikoma, believing in him to be capable of saving people in the Koutetsujou. As Ikoma became a Kabaneri, in order to sate his hunger, Takumi offered his own blood.[7]

Retrieved from "https://koutetsujou-no-kabaneri.fandom.com/wiki/Takumi?oldid=6074"
Community content is available under CC-BY-SA unless otherwise noted.