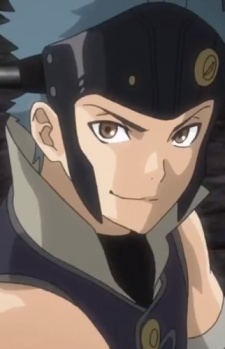 Uryuu (瓜生) is the captain of the Hunters.

Uryuu is very loyal to Biba, he does all the dirty work for him without questioning his motive. He often show distaste for bullying the weak and defenseless.

During Biba's attack on Kongoukaku, Uryuu led a force which took care of the gate guards of the fortress, opening the gate for Kokujou to enter, allowing Sahari to release a large number of Kabane into the city.

In response to Biba's comment on Ikoma's strength, Uryuu asked Biba if he wanted him to kill Ikoma. Biba turned him down, and requested him to save his men and lead them out of Kongoukaku instead.

While Ayame and Koutetsujou's crew were planning to escape using the train, Uryuu showed up with his men, proposing a deal: information about a secret escape route for their place on the Koutetsujou. Knowing there's no other way out of the city, and to avoid more conflict between the two groups, Ayame accepted his offer. In return, Uryuu told Ayame that Ikoma and Kurusu are both in Kongoukaku. Knowing this, Koutetsujou's crew called out to them using the city's broadcast system, announcing their escape plan. This information was vital to Ikoma, Kurusu and Mumei's return to the Koutetsujou.

Retrieved from "https://koutetsujou-no-kabaneri.fandom.com/wiki/Uryuu?oldid=5851"
Community content is available under CC-BY-SA unless otherwise noted.