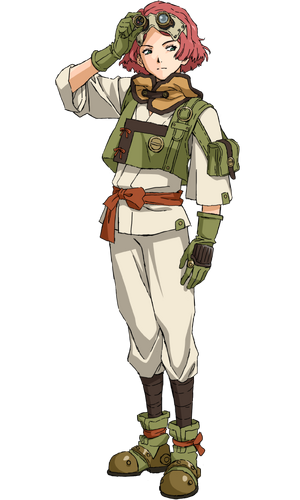 On the second episode when Mumei was asking who could drive the Koutetsujou, Yukina comes forward stating that she is only a trainee.

Mumei asks "What's so hard about moving something along a rail?"

Yukina is a light skinned girl with a lithe, yet muscular, physique and strawberry red hair. Typically aloof and with a rather neutral expression, she is usually seen wearing her engineer uniform.

Yukina is shown to be compassionate towards other's feeling. This is evident when she tried to hide the fact from a boy about his father's fate to protect him. At times of need she is stern and serious towards her job and uses her knowledge about koutetsujou to protect everyone.

First seen in the Koutetsujou's cabin as an apprentice, she has so far been either assisting with the train's piloting or doing it personally. With minimal interaction with the remaining cast, she seems rather focused with her current duties and the train's repair work to fraternize with anyone, and only speaks to the remaining crew whenever necessary.

While stated to be merely an apprentice, she has shown herself to be competent enough to be the Koutetsujou's primary engineer once the evacuation begins. She also has a well defined set of muscles, and so one can safely assume she has a fair bit of physical strength to her.


Cite error: <ref> tags exist, but no <references/> tag was found
Retrieved from "https://koutetsujou-no-kabaneri.fandom.com/wiki/Yukina?oldid=6100"
Community content is available under CC-BY-SA unless otherwise noted.